Welcome to the world of mushroom growing!

Want to learn more about the world of fungi? Check out our media selection below-or better yet, sign up for one of our courses, covering diverse subjects like creating mushroom logs, indoor and outdoor mushroom cultivation, and foraging for wild mushrooms.

King Stropharia (stropharia rugosoannulata) is a mushroom of many names.  Whether you know it as the Garden Giant, Wine Cap, or Burgundy Mushroom, it’s a fungus that’s much talked about in gardening and permaculture circles, and with good reason.  As one of the easiest and most productive mushrooms to grow outdoors, King Stropharia is a wonderful addition to the home or market garden.

King Stropharia (stropharia rugosoannulata) is a mushroom of many names.  Whether you know it as the Garden Giant, Wine Cap, or Burgundy Mushroom, it’s a fungus that’s much talked about in gardening and permaculture circles, and with good reason.  As one of the easiest and most productive mushrooms to grow outdoors, King Stropharia is a wonderful addition to the home or market garden.
‍
I first started growing this mushroom some five or six years ago, using spawn bags that had sat outside frozen solid all winter.  In early May, my partner Tamara and I cleared the paths between beds in our garden, then put down a base of wet cardboard (most mushrooms’ favorite food) before sprinkling the now-thawed Stropharia spawn and covering it with fresh deciduous wood chips.
‍
I’m pretty sure that that same patch is still fruiting today.  We lay down extra wood chips periodically, as this mushroom is an aggressive decomposer, but besides that we pretty much just sit back and wait for the mushrooms to roll in.  The Stropharia tend to pop up along the borders of the path, at the intersection with the annual vegetable beds.  There they benefit from regular watering, and the ample shade provided by the type of garden that grows by itself when you’re paying all your attention to the mushroom farm.
‍
Stropharia can grow to an impressive size (hence the “King” or “Giant”), but are best consumed before the cap is fully open, and when the veil on the underside is still intact.  As a relatively soft-fleshed mushroom growing outdoors, they can also attract insects and slugs if left to over-ripen.  They substitute well for button mushrooms or portabella in most recipes, and have a taste once memorably described as like “undercooked potatoes soaked in Burgundy.”  We love them lightly sauteed or grilled, and harvest them regularly from May through September each year.
‍
Preferred growing media:  Stropharia love fresh hardwood chips, but will also tolerate a mix of hardwood and conifer (with the exception of cedar).  Straw is also a popular choice, as are other fibrous agricultural waste products.  The rhizomorphic (thick and ropey, root-like) mycelium grows best when the growing media has a large particle size with abundant air gaps.
‍
Best time to start:  We like to start Stropharia patches in April or May in our interior BC climate.  Expect two to three months until fruiting, and a fruiting season from May through September in subsequent years.  This species is cold tolerant, but will need regular watering in the first month after inoculating.
‍
Expected yields:  Very good, but somewhat unpredictable.  Expect at least several lbs per year from each 5’x10’ bed.
‍
As with any mushroom growing outdoors, correct identification is critical before consuming.  See our instructions  for details, and when in doubt, send us a message to confirm your ID!

These ready-to-fruit kits are our most user-friendly item. Simply cut open the bag, keep warm and moist, and wait for mushrooms to spring to life! Each kit contains live mushroom mycelium, growing on a fruiting mix of hardwood sawdust and organic wheat bran.

Commercial mushroom farming in any form is a relatively recent pursuit.  Although edible and medicinal species have been foraged for millenia by cultures around the world, the vagaries of the fungal life cycle confounded would-be cultivators for most of that time.  In recent decades however, a few simple processes have been developed that have allowed growers to fruit wood-loving mushrooms (such as oyster, shiitake, lion’s mane, and more) in large quantities and on a predictable timeframe.
‍
These mushroom varieties fruit from dead trees and stumps in nature, but can also be cultivated on other media, with more consistent results.  Growing mushrooms on hardwood sawdust supplemented with a nitrogen-rich additive (I use organic wheat bran) has become one of the industry-standard techniques, as is the method I use for most of my commercial fresh mushroom production.  This sawdust-based substrate is mixed and bagged in special heat-resistant mushroom bags, then sterilized or pasteurized to remove any unwanted bacteria and molds that might compete with the growing mushrooms.
‍
Our farm is a bit of an outlier in the mushroom growing world, as we grow in outdoor fruiting chambers that are not temperature-controlled.  This means we only grow seasonally, and choose different strains for different times of year.  With this in mind, we choose strains that will be able to adapt to a wide variety of conditions.
‍
It turns out that these fruiting blocks are also perfect for other cultivators, either pure beginners or those further along on their growing journey!  They can be fruited in or outdoors and produce beautiful gourmet mushrooms in just a few weeks.  Plus, all of the strains are ones that we’ve been working with and selling to our local customers for years.  I don’t want to oversimplify, but it’s really about as simple as cutting open the bag and keeping the mushrooms moist as they grow.
‍
These mushroom kits can also be used as an inoculant for other growing projects, although this is a bit more involved and I can’t guarantee success without some prior knowledge and experimentation.  But, speaking as someone who routinely kills houseplants, growing some oyster or shiitake straight from the bag is a cinch.  You should try it sometime!
‍
The Facts:
What’s in the Bag:  Each bag weighs 5-6lbs, and contains a certified organic fruiting blend based on hardwood sawdust and wheat bran.  This has been colonized by mycelium (mushroom “roots”) of the desired mushroom species.
‍
Best time to start:  Grow-at-Home kits can be grown all year inside, or in a shady location outside between April and October (the strains we have seasonally available are usually the appropriate ones for outdoor growing at that time, at least in southern BC).
‍
Expected yields:  variable depending on species, but usually a lb or more per kit, spread over two harvests or “flushes”. 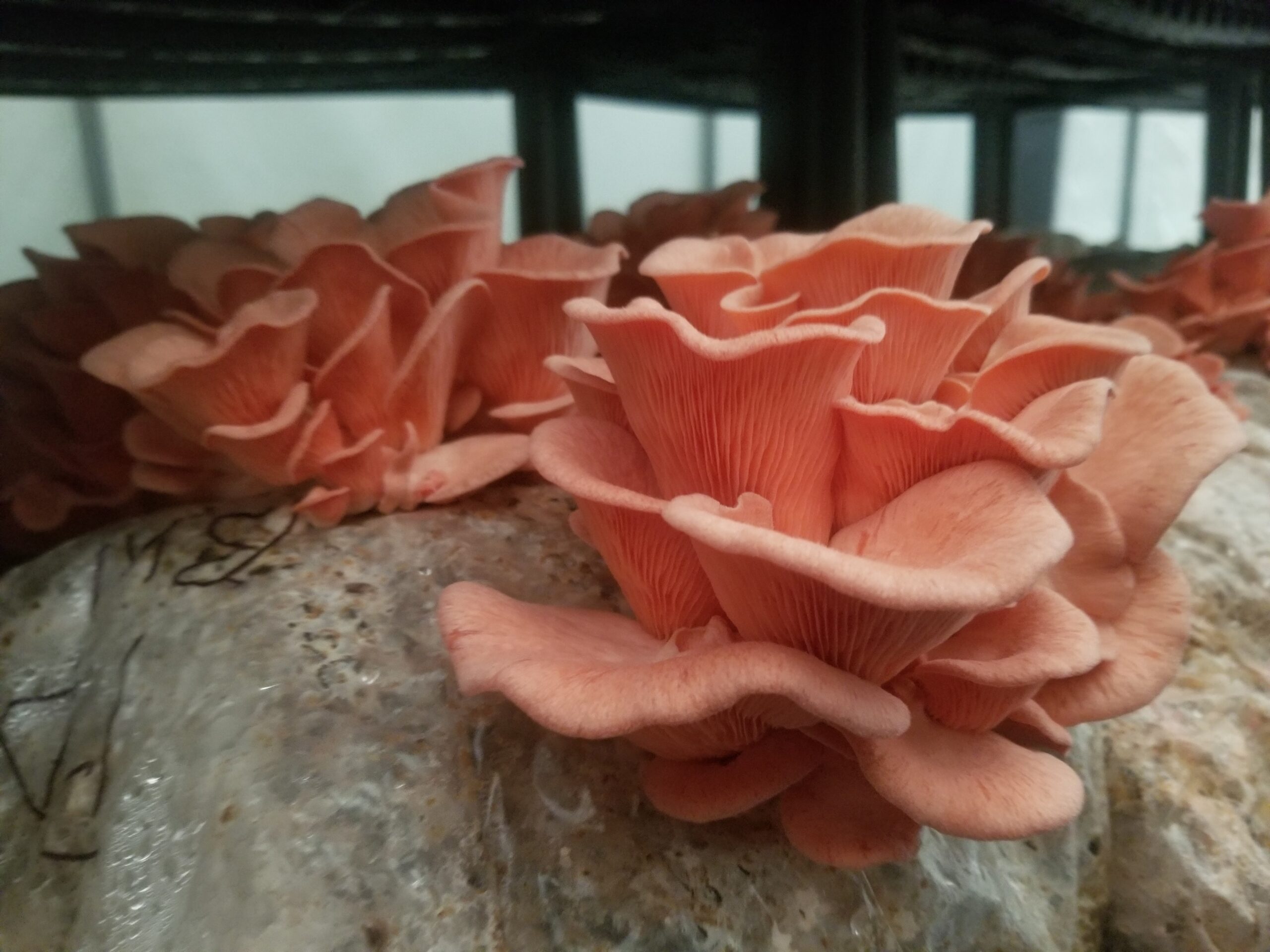 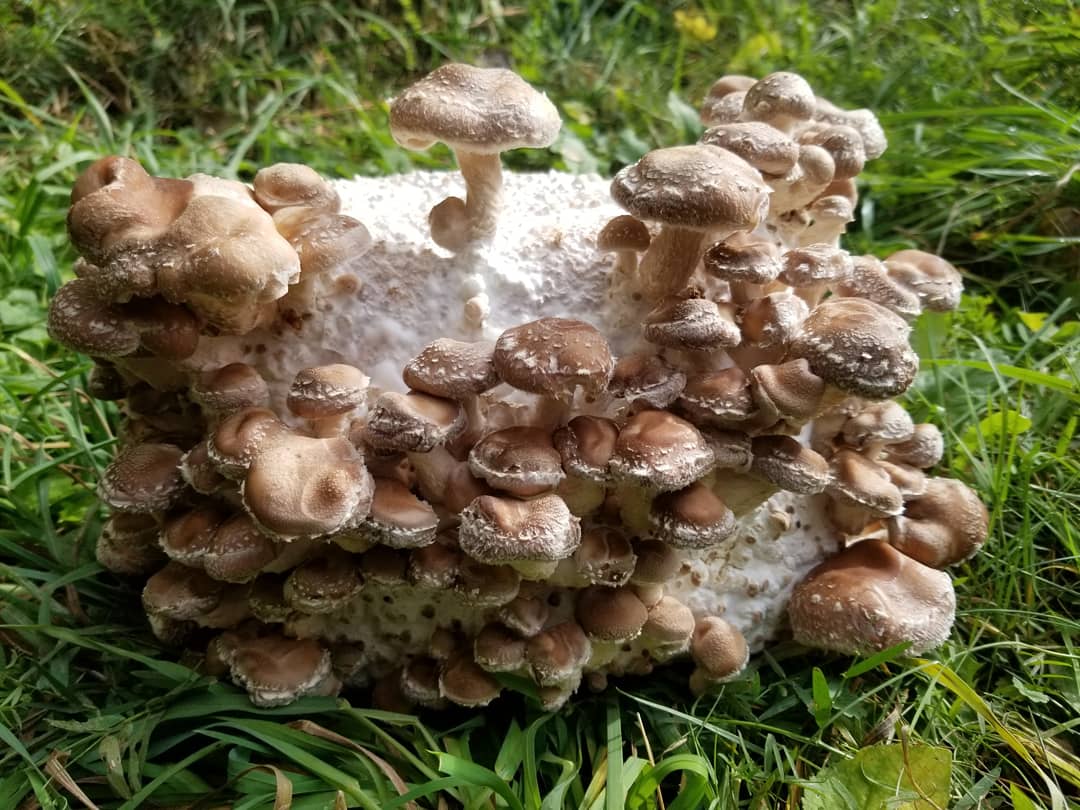 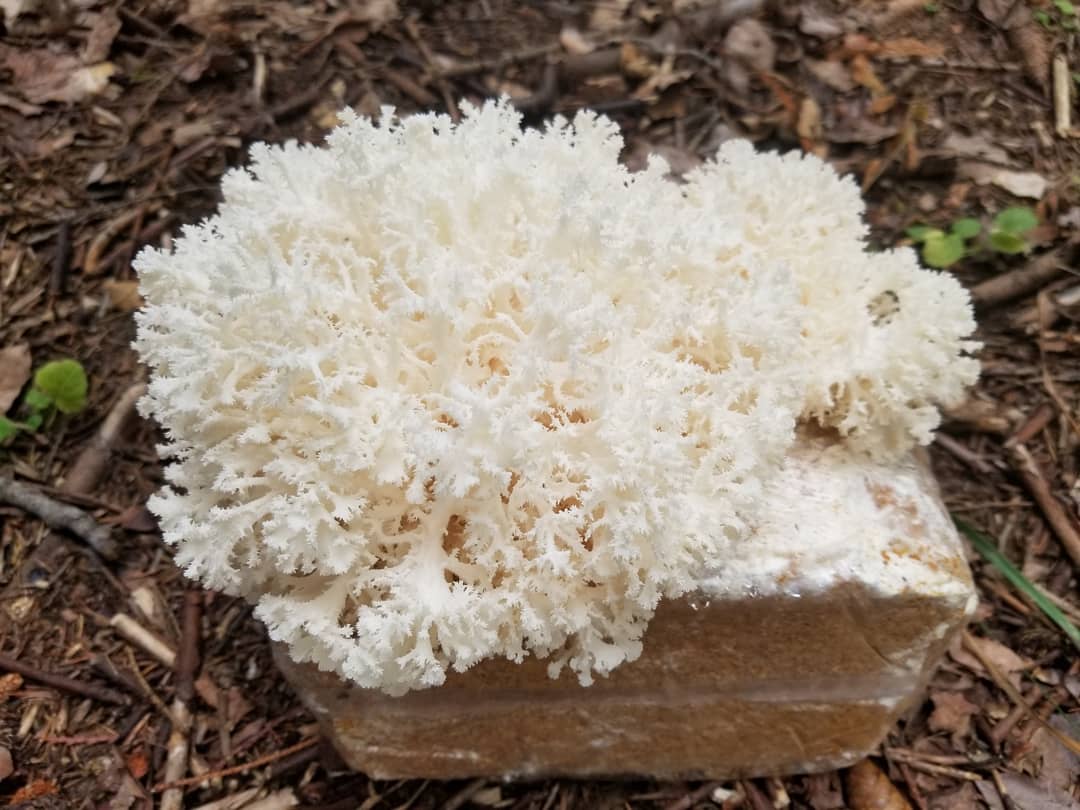 All of the mushrooms that we grow are woodlovers, meaning they (surprise!) grow on dead branches, stumps, and logs in nature.  This is in contrast to the more commonly known white button mushrooms, crimini, and portabella, which are usually grown on a fruiting mix based on animal manure.

All of the mushrooms that we grow are woodlovers, meaning they (surprise!) grow on dead branches, stumps, and logs in nature.  This is in contrast to the more commonly known white button mushrooms, crimini, and portabella, which are usually grown on a fruiting mix based on animal manure.
‍
When cultivating woodloving mushrooms, the simplest approach to take is to recreate their natural habitat, while increasing our chances of success by inoculating multiple points on a log at the same time.  The easiest way to do this is by drilling a series of holes through the bark of a freshly cut hardwood log, then inserting mushroom mycelium, either in the form of sawdust or dowel spawn.  We then seal the inoculation sites with a food-grade wax, to ensure that the growing mycelium stays moist and is protected from other predatory fungi or bacteria.
‍
When deciding whether making mushroom logs would be a good project to take on, there are a few things to consider.  The first is time; the average mushroom log will take around a year before any mushrooms are produced, though it should fruit for several years after if properly cared for.  When using an annual vegetable garden as a frame of reference this can seem like a long time.  In the world of trees however, this is positively speedy! Log don’t require much ongoing maintenance, and as long as they are situated in a shady spot and receive a drink of water periodically they’re pretty easy-going.
‍
A ready source of wood is also critical; as the average log will only produce up to a lb per year, it’s nice to make a bunch at once, regardless of if you’re growing for yourself or for others.  The whole process is pretty quick; I inoculate each log in well under ten minutes, and that’s with just one of me on the job.  Getting in touch with local arborists or logging contractors can be a great way to source some wood if you’re not lucky enough to have your own forested area or woodlot.  Often there’s plenty of waste wood up for grabs that wouldn’t otherwise find a home.  Last winter the local power company had crews clearing all of the trees near the lines in my hometown of Kaslo, leaving beautiful pre-cut lengths of paper birch and maple free for the taking!
‍
The beauty of log growing is also in the many forms it can take, depending on the desired outcome.  For example, we have shiitake logs stacked log cabin style in the shady forest by the creek, ready to soak and fruit to fit our production needs, but we also have oyster logs edging parts of our home garden for picking along with the day’s veggies.  We’ve got local reishi on a large windfall hemlock, and phoenix oyster on Douglas fir next door in the Community Forest land.  I increasingly feel that this is one of the purest and most satisfying forms of mushroom cultivation: the cutting, the drilling, the tending, the waiting.

With a 5lb bag and enough logs, you could produce 25lbs of mushrooms every year for the next 5 years.

Mr. Mercy’s Mushrooms works with Selkirk College offering you a selection of courses to feed your curiosity.